Paul Spivey first connected with Total Edits & Design for a book editing project. A former running back for the University of Alabama Crimson Tide, Spivey was recruited by the legendary Coach Paul “Bear” Bryant. He played on his 1971, 1972, and 1973 SEC Championship Teams, and the 1973 National Championship Team. Spivey also lettered in baseball.

When injuries prevented Spivey from playing, he found fresh motivation in the business world where he served as General Manager, Senior VP, COO, President and CEO of various multi-million dollar corporations.

His first book endeavor is titled, “The Missing Peace.” 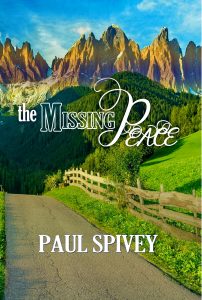 “The Missing Peace” is a fearless expose on why there is an ache, literally a relentless throb in the human soul for completion. As lies are boldly unmasked and truth is carefully revealed, a step by step process unfolds igniting heart understanding. Resolution offered to breach the ageless reach of God to man and man to God that can last a lifetime and beyond, awaits each reader’s discovery within these pages.                THE MISSING PEACE

As an acknowledged recovering alcoholic and drug addict, Spivey’s past four years have demonstrated radical change in his life pursuits. His friend, 1970s teammate quarterback, Gary Rutledge, said that “Paul has struggled with addictions, and just painful difficulties of life–seeming lost mentally, physically, and spiritually…now Paul has been changed, having developed a relationship with Jesus Christ he is a new person — he has ‘been fixed,’ from a depressed, lost person to a ‘man on fire’ for God. In ‘The Missing Peace,he makes you stop and think. He makes you ask yourself questions about the direction you may be going, about God and who He is, and what His purpose is for your life.”

Although not previously published, Spivey can easily be found on Facebook where he often shares many of his personal life experiences for the encouragement of others. His writings have a unique element of identification with the use of “B” in lieu of more accurate grammar tense verbs of “am,” “is,” and “are.” I B. We B. She B.

You can reach Mr Spivey by email: <prspivey7@gmail.com>, or through his website created by Total Edits & Design:

One fun thing Total Edits & Design created as a surprise for Mr. Spivey: A  fresh face (pun intended) for his faded souvenir player trading card which can be used in his online articles. 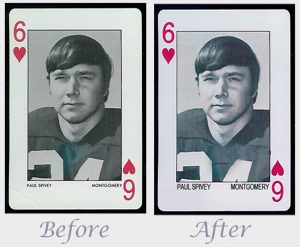 TOTAL EDITS & DESIGN gratefully acknowledges the patronage of Paul Spivey. A fine gentleman and affable creative, his projects have been a delight to work with and his friendship a rich blessing.

Paul Spivey Recommends: “Whether you are a seasoned professional just needing some extra polish and shine, or a novice who needs a lot of hand holding, encouragement, and instructions, Total Edits & Design by Martha Langley is the right place at the right price.

It is not just the special talents and skills that make the final products snap, it is that extra dose of attention and care that goes into all that her hands find to do. You may start as a business client, but I would be shocked if it does not end in a new friendship.”